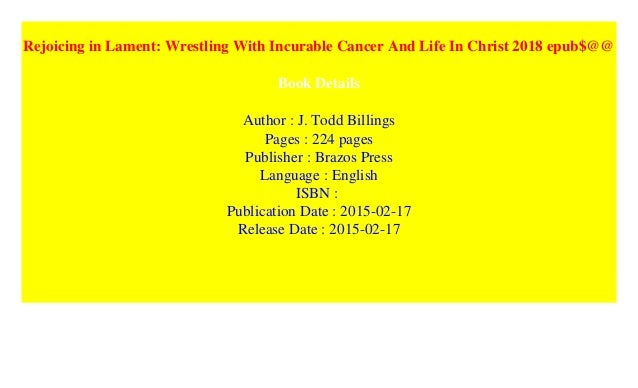 The sky was closing in, enveloping my whole world so that nothing else could creep in. But God's story, the drama of God's action in the world, was bigger. The girl in my church wasn't denying the fog or the loss but testifying to a God who was greater, the God made known in Jesus Christ, who shows us that "the light shines in the darkness, and the darkness did not overcome it" John In my tears, there was not only grief but also joy that in the body of Christ theological truths are not a commodity trafficked and controlled by professional theologians. God's story in Christ is bigger than my cancer story, period.

This book explores the way in which God, and the drama of his revelation in Christ, is bigger than my cancer story. The first six chapters build on one another in their reflection on God's story in relation to my cancer story. They do not give a sequential, month-by-month account, but offer different angles of vision into the reality of diagnosis and my first six months of chemotherapy In chapters 7 and 8, I continue the story of my cancer chronologically with my theological reflections during nearly a month in the hospital receiving a stem cell transplant. The final two chapters complete my theological reflections on God's story as I emerged from the transplant into a time of quarantine because of a compromised immune system and eventually returned to my "old" life, in a new way.

This first chapter begins my telling of the cancer story and provides some initial biblical and theological reflections that will be explored further as the book moves into later chapters: how God's story relates to my cancer story; the Psalms as companions in our Christian pilgrimage; the meaning of life in Christ and God's final victory over death. God is bigger than cancer. Yet, from those early days in the fall of , I sensed that my unfolding cancer story was not to be denied or repressed because of God's story, either. The news felt like a heavy burden.

When I would see students and colleagues at the seminary where I work Western Theological Seminary and respond to their queries of "How are you? My wife and I decided to share the news publicly—with no "secrets"—within two days of receiving the diagnosis. An emergency faculty meeting was called. No dry eyes. An announcement went out to the seminary community, the church, and friends on Facebook. For better or worse, my cancer journey was no longer just my own or that of my family. It was shared with our community. There are risks with that kind of sharing, as cancer patients know.

Our culture often suggests that we are "entitled" to a long, fulfilling life, and if that doesn't happen, there must be someone to sue, someone to blame. When the word "cancer" is spoken, looking to the future reveals only a fog of uncertainty It brings to mind a life that is spent in the process of dying—a casket waiting to be filled, with no politician to blame for it.

In this state of affairs, people often don't know how to respond. Many simply said that I would be in their prayers.

More than a bookstore

Some shared a Bible verse in encouragement. Some allowed the conversational habit of "free association" to hold sway, sharing about the last person they knew who died of cancer or of someone they knew who had a remarkable recovery from cancer. For the patient, the last approach tends to be the least helpful. And the more public the news is, the more frequently one will hear stories of others with the same cancer who died an early death, herbal remedies that one must try, or other less-than-helpful bits of advice.

Whether or not cancer patients intend to share their journey openly with others, they generally find that the cancer situation itself has put their lives into a fish bowl—for public viewing—whether they like it or not. Now, with a "terminal illness," they are relevant questions for all who care about my family and me.

My body—its test results, its symptoms—has become a public spectacle, something for public commentary.

Some things are kept private. But much that was formerly private is no longer so. Sharing the cancer story, however, can also open the door for many blessings to flow. One blessing is that I have been able to explore—and bear witness to—the ways in which God's story intersects with the cancer story; how my cancer story is complicated and mysterious but not nearly as compelling as the mystery of God's love made known in Jesus Christ. This opportunity came with the initial announcement of my diagnosis, where—in all of the various venues—I included the following words from Question and Answer 1 of the Heidelberg Catechism: "What is your only comfort in life and in death?

That I am not my own, but that I belong—in body and soul, in life and in death—to my faithful Savior Jesus Christ.

My life is not my own. This opportunity was soon amplified when I began to chronicle both stories on CarePages, a blog site for those who want to update family and friends as they struggle with illness. Within a week of my diagnosis, I started chemotherapy. There was a lot of medical information to be shared. The sharing of that information on an individual basis was laborious and intense.

And overwhelming. I soon decided that starting a CarePages blog would be wise—to share the medical information to all who were interested, all who were praying. Moreover, it could be a forum for sharing the intersection of the two stories that I found myself in.

In many ways, this book is an extension of that initial effort at sharing, exploring, and testifying to the way in which the drama of the Triune God intersects with my story of pain and disorientation due to cancer. Here is a section from my CarePages posted on October 11, , which was about two weeks after the diagnosis.

It gives a taste of the genuine lament and yet hope in and through Christ that later chapters will continue to explore. In the months following, I would return to these themes again and again: a genuine lament and a genuine rejoicing in God's promises—promises that, as expressed in the Psalms, are the basis for praise, trust, and also complaint and lament; promises that find their fulfillment in Jesus Christ, and life in him by the Spirit. But this life in Christ, while abundant, cannot be measured by a life span. A week after the post above, I continued my CarePages reflections after attending a conference in Detroit focused on my cancer, multiple myeloma.

The conference raised medical and theological questions: What will this cancer mean for how I view the future? Does God owe me a long life? What would it mean to say that abundant life in Christ cannot be constricted by the length of a life span? This CarePages entry represents a kind of "first brush" with the existential and theological issues raised by the mixed blessing of a medical prognosis.

In the prognosis process, it's hard not to be paralyzed by numbers. About fifteen years ago, the median life span for someone diagnosed with multiple myeloma was two to three years. Now, it is about double that. But what numbers apply to me, as an unusually young patient? It's really hard to tell. One doctor examined my medical results and sought to encourage me by suggesting that I had a good possibility of living longer than some other patients—I had a 50 percent chance of living ten years, he said. What does that mean?


I'm either alive or dead. I can't be 50 percent alive, just as a woman cannot be 50 percent pregnant. Todd Billings. At the age of thirty-nine, Christian theologian Todd Billings was diagnosed with a rare form of incurable cancer. In the wake of that diagnosis, he began grappling with the hard theological questions we face in the midst of crisis: Why me? Why now? Where is God in all of this? This eloquently written book shares Billings's journey, struggle, and reflections on providence, lament, and life in Christ in light of his illness, moving beyond pat answers toward hope in God's promises.

Theologically robust yet eminently practical, it engages the open questions, areas of mystery, and times of disorientation in the Christian life.

Billings offers concrete examples through autobiography, cultural commentary, and stories from others, showing how our human stories of joy and grief can be incorporated into the larger biblical story of God's saving work in Christ. The Book of Job. Praying with the Psalmist amid a. 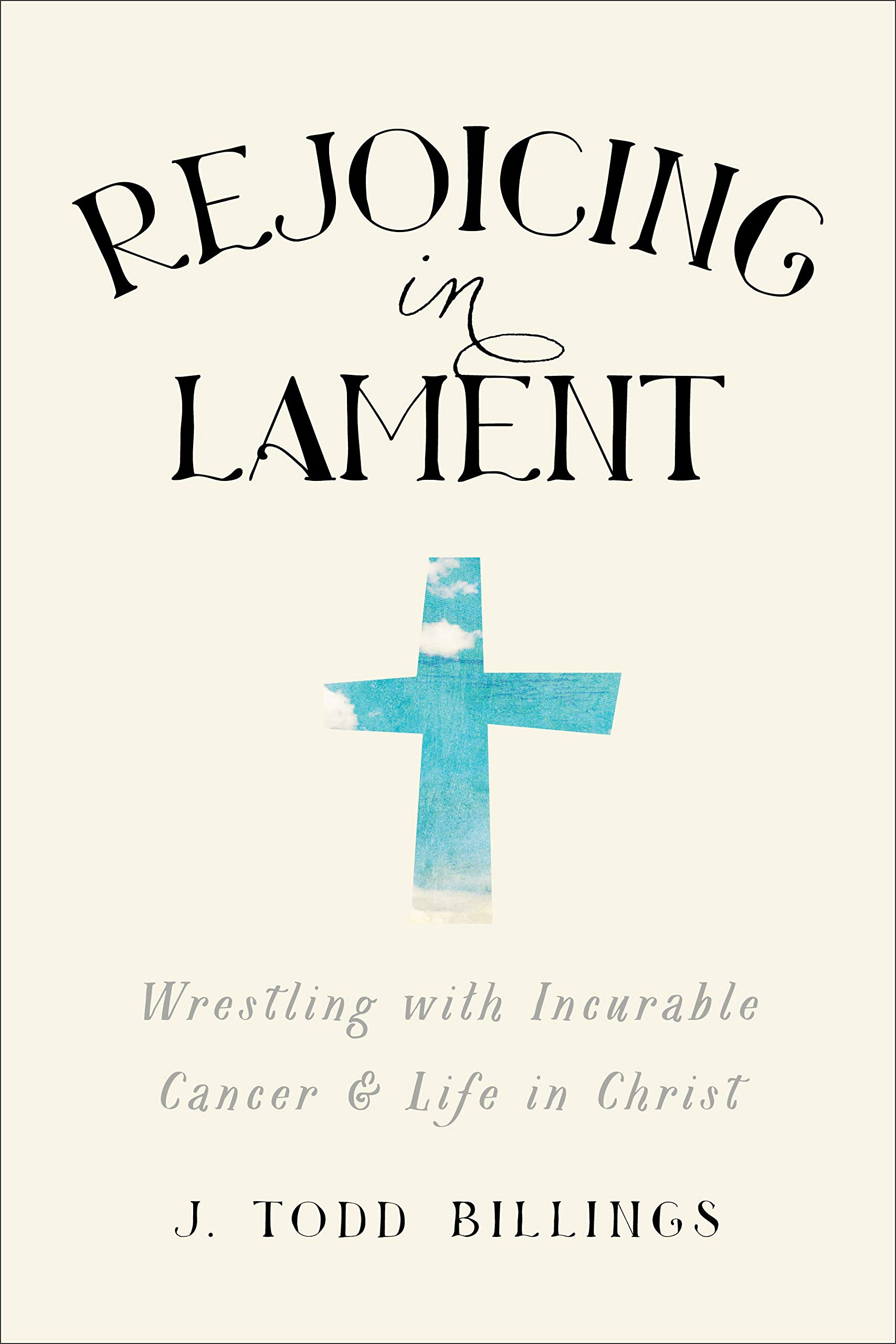 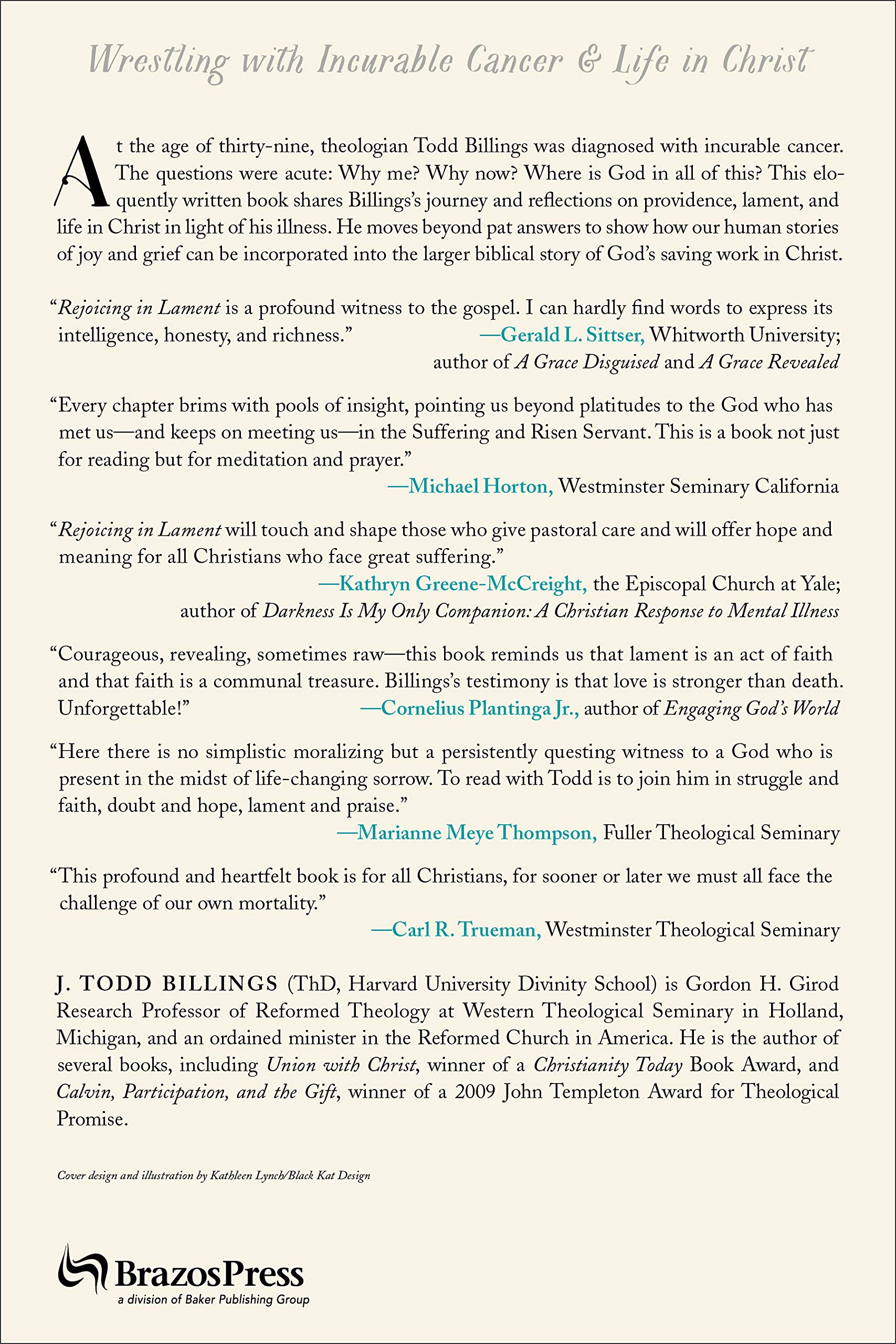 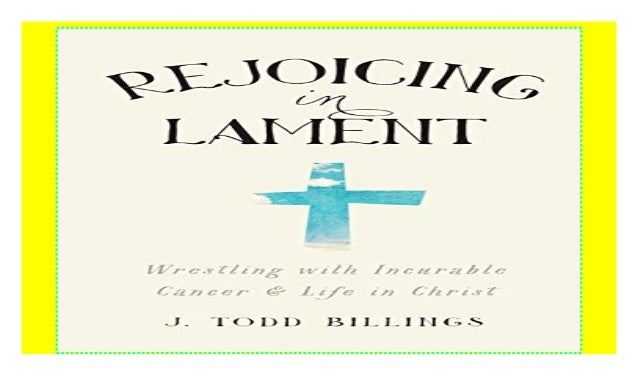 Related Rejoicing in Lament: Wrestling with Incurable Cancer and Life in Christ